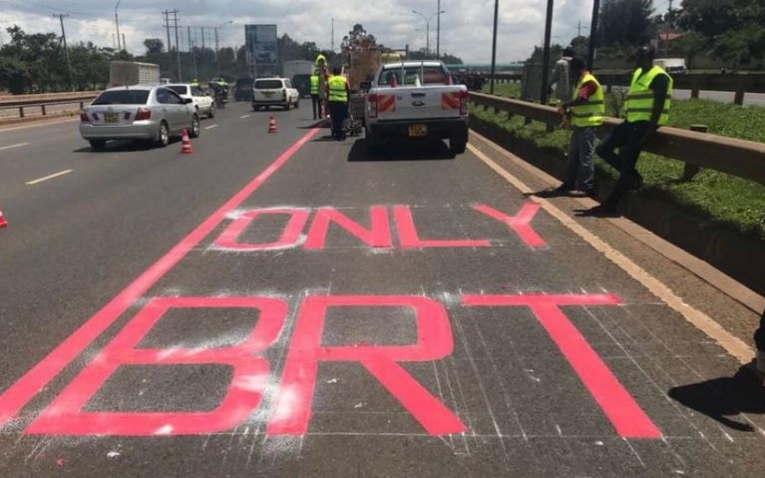 Among the upcoming projects by the Government of Kenya is a plan for a special bus lane on Thika superhighway. The high capacity public transport vessels are said to be one of the reasons for snarl-up on the busy highway, hence a special lane would be a good way to tackle the high traffic jam in the city.

In support of the new project, the government of Kenya signed a 5,6 million agreement with Chinese company Steel Corporation for the creation of a bus rapid transit (BRT) to initiate the plan on Thika road in August.

Further, the contract included  Stecol Corporation constructing special lanes dedicated to high capacity buses carrying about 160 passengers. These special lanes would run from Haile Selassie in the city centre and end at Clayworks on the Nairobi -Thika highway.

One of the duties assigned to the construction company was to convert the two innermost lanes of the Thika superhighway to support the special lanes. For this to happen, the company is also expected to change the structure of the highway to that of  BRT facilities. This means that the highway will have boarding stations and footbridges to facilitate access to the buses.

Thanks to the project, Kasarani will host a ride-and-park area which will allow motorists travelling the city centre to park their vehicles and board the buses for the rest of their safari.

Talking to the Daily Nation newspaper, Housing and Urban Development Principal Secretary Charles Hinga said the BRT system is expected to be completed in a matter of 8 months. “We signed the contract last week and the contractor is mobilising to commence next month for the first phase covering the corridor from Clayworks to Haile Selassie and then to Kenyatta National Hospital,”

In 2017, the government demarcated lanes on both the Thika and Mombasa roads to introduce high capacity buses, 64 buses to be specific for deployment. This was the last moment ever since the government talked on the bus acquisition in the city. However,  the government now wants private operators to cooperate and run the project under the supervision of the Nairobi Metropolitan Area Transport Authority (NaMATA).

The NaMATA chief executive has stated that there are plans to deploy up to 100 buses in the initial stages of the project and later add another 850 buses at full application. He also added that the new system would give public transport operators a chance to be part of an operating company which will be given the responsibility of running the services.

Francis Gitau also revealed that NaMATA will have corridors in Nyati, Chui, Ndovu, Simba and Kifaru counties for use of the buses.

“The Ndovu line will cover Limuru-Kangemi, CBD-Imara Daima-JKIA to Athi River and Kitengela. Simba covers Rongai-Bomas-CBD-Ruiru-Thika and Kenol while the ‘Chui’ line runs from Tala to Njiru-Dandora-CBD-Showground and Ngong.”

“Kifaru covers Kayole-Mama Lucy-Donholm-CBD-T/Mall-Bomas-Karen-Dagoreti and Kikuyu. Apart from the Outer Ring road corridor design from Imara to Balozi Estate, Nyati will be remodelled to cover Kiambu-Balozi and Imara Daima.”

This project completion will be a fulfilment to remarks by Transport CS James Macharia who said back in 2016 that a 41.3 billion project would not come to pass due to challenges in the then  road infrastructure to provide for bus lanes.“In the mass rapid transit system, there are two components: the commuter rail and the bus. The bus will be very difficult (to implement) because we don’t have the lanes for the buses. What will come is the commuter rail as it will use the present rail,” Mr Macharia said.

Reports have it that the World Bank invested in the project with sh 30 billion, the remaining Sh 11.3 billion being provided by the Kenyan Government.