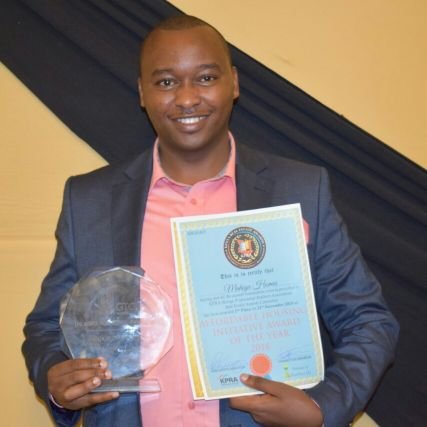 The journey to success is never a straight line. It is filled with ups and downs which later shape us. It’s no different for the chief executive of Mahiga homes Mr Peter Nyaga. Having delivered many projects to their clients in a span of two years, Mahiga homes is a real estate company that specialises in construction and sales of homes. This company is currently running projects in Ruiru, Kenyatta road, Joska, Kamulu and Kitengela.

The story of this great entrepreneur starts back in the days when he was in high school. While other students were having their leisure time, Peter would sell biscuits and sweets to his fellow students and friends. It was with this small business that he could get enough profit to help him survive.

After finishing his secondary education, Peter volunteered to help his brother in selling land plots as an errand boy. This was the first time that he first engaged in real estate since the brothers’ firm was also involved in renting houses and offices. While helping his brother, he could be given money to handle some of the official duties and basic tasks that he was asked to do.

“I wanted to get experience in Real Estate. I knew as an errands boy he could give me fare, and also, I had relatives in Nairobi so somewhere to sleep was not a problem. If I had fared and somewhere to sleep, the rest would sort itself.” he stated in an interview

After working as an errand boy for 6 months, he then earned his first million. He was now sure that he had gained the needed experience and skills to help him run his own real estate firm. Peter started planning his exit from his brother’s firm to start his own. However, peter’s brother did not receive this decision with excitement. He was sceptical that Peter was still very young and inexperienced. But that did not stop him from falling for his new passion, real estate. After 7 months peter finally started his own company,

Making smart moves, Peter used the contact and connections he had gained from his brother’s company to help him establish his own. For a span of 3 years, peter specialised in selling plots then later ventured into construction. He could build homes for clients that had land and needed help in setting up a home.

The birth of Mahiga homes was not until the government of Kenya announced its need for partnership with real estate firms in its plan for affordable homes.  Peter then teamed up with 5 of his friends to make the now Mahiga homes, back in January 2018.

“After doing construction for 3 years, I teamed up with 5 friends whom we together did research and identified a gap in affordable homes. Previously, house prices have been very high and many people could not afford them. Many Kenyans would like to own a home but could not afford, that is where Mahiga homes came in – to fill this gap.” Peter says.

With broad experience in construction, sales and marketing, real estate, organizational leadership and human resource, Mahiga homes had the best of directors. it now had the power to dominate the market.  The partnership came along with sharing ideas, resources and experience.

In less than years, the company with Peter Nyaga as the chief executive has already delivered 11 projects with four of these projects fully handed over to customers. They are now homeowners have moved in.  For the remaining 7 projects, 5 of them have already been sold out and near completion.