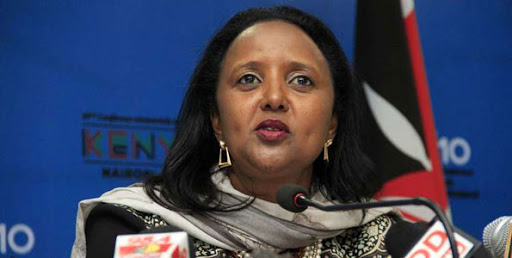 Kenya has nominated Cabinet Secretary Amina Mohamed for the position of Director-General of the World Trade Organisation (WTO). She will contest against five other candidates, including two from Africa, to secure the seat that eluded her seven years ago. Ms Mohamed hopes to succeed the current Director-General, Mr Roberto Azevedo who announced he will step down on 31st August 2020.

The WTO, formed in 1995 is a rule-making body that guides international trade and resolves disputes. It is based in Geneva, Switzerland. The WTO promotes trade for the benefit of all countries. It provides a unique forum for trade negotiations and the settlement of disputes among its members. It is the only platform for the integration of developing nations into the world economy.

Ms Mohamed had contested against Mr Azevedo, but she lost on a decision made by the census among member states in 2013. The WTO announced on its website that Ms Mohamed candidature was submitted on July 7 by the Kenyan government. According to the timetable announced by the Chair of General Counsel, David Walker, the nomination period closed on 8 July 2020.

Ms Mohammed is the current President of the 14th United Nations Conference on Trade and development. In 2005, she was Chairperson of the General Council, the highest-level decision making organ of the WTO. It is composed of envoys from member states. She said she had helped Steer the WTO to adopt the agreement on Trade-Related Aspects of Intellectual Property Rights (TRIPS). It helps poorer nations use technology from wealthy countries to make useful items like generic drugs. This does not harm their intellectual property owners.

She is an advocate of the High Court of Kenya with an undergraduate and masters degree in Law from Taras Shevchenko University in Ukraine. Besides, Amina has a postgraduate diploma in international relations from Oxford University. She also served as head of the Dispute Settlement Body and Trade Policy Review Body. Amina stated in the bid submitted to WTO that She will use her skills to make the WTO more responsive to current concerns in international trade.

“Owing to her outstanding credentials, I do again strongly believe that Ms Mohammed will have support from countries across the world, with our pledge as Kenya not only to support her but to continue working closely with all countries on the African Continent and across the world to build consensus and a truly meaningful multilateral trade platform that every country can benefit from,” said the President of Kenya Uhuru Kenyatta.

Other candidates include Egyptian Commercial Law Academic Abdel-Hamid Mamdouh, Mr Jesus Seade Kuri of Mexico, Nigerian Finance Minister Ngozi Okonjo -Iweala, Ms Yoo Myung-hee of South Korea and Moldova’s Tudor Ulianvoschi. The candidates vying for the WTO top job will seek to convince its 164 members they can direct the body through intensifying global trade tensions and rising protectionism. The Director-General of the WTO is appointed through census, this means candidates will have to do lots of horse-trading ahead of the decision on August 31, 2020.