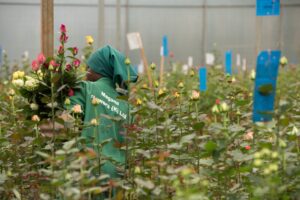 Magana Flowers had stood out as among the few farms in Kiambu that had resisted the allure of real estate. After 25 years in the floriculture industry, Magana Flowers decided to close the doors of their farm. It is managed under Magana Holdings, which owns the asset including part of the land leased to numerous factories. After shutting down, the company plans to use the vast land for real estate development. It will be the latest farm to submit to the allure of housing development.

A few farms have been able to hold on to farming while most farms have paved the way for housing projects over the recent years. Vast farms have yielded to the lure of real estate with many large and small farmers abandoning crops to sell their land to developers or set up real estate projects. The Magana flower firm was founded by Dr Mungai in 1994 and has been primarily operated by his two daughters since his death in 2014. The farm sits on 62 acres of land situated at the heart of Kikuyu and just 40 minutes from the main international airport.

“After 25 years in the floriculture industry, Magana Flowers is restructuring its business operations. We have been privileged to see and experience not only the evolution of this industry, but also the growth and development of our employees, and to contribute to the Kenyan economy at large,” said Chief Executive Paul Salim in a statement to employees. The firm said it had decided to close due to challenges in the industry that affected the company.

According to the Kenya National Bureau of Statistics (KNBS), earnings from the export of flowers grew more than 49 per cent to Sh65 billion between January and July this year compared to Sh49 billion over a similar period last year. Mr Salim said that the company reviewed its business strategy in line with the wider operating environment, both locally and internationally. He added that the decision had not been easily made given the prevailing circumstances.

“The industry has gone through significant changes which have greatly affected Magana Flowers and on review of our business, we find that it is no longer possible to continue with our business operations based on the current business model. It is with the consideration that the Board of Magana Flowers has decided to restructure the company’s operation by ceasing the production and export of flowers,” the company announced on July 30th, 2020. The firm cited Climate change, the cost of inputs and fertilisers as the major challenges it faced. The workers have been fully settled since the company issued a notice that it plans to use the land for real estate development.

However much its shut down to take other strategised direction,Magana will still remain to be the best at all time.